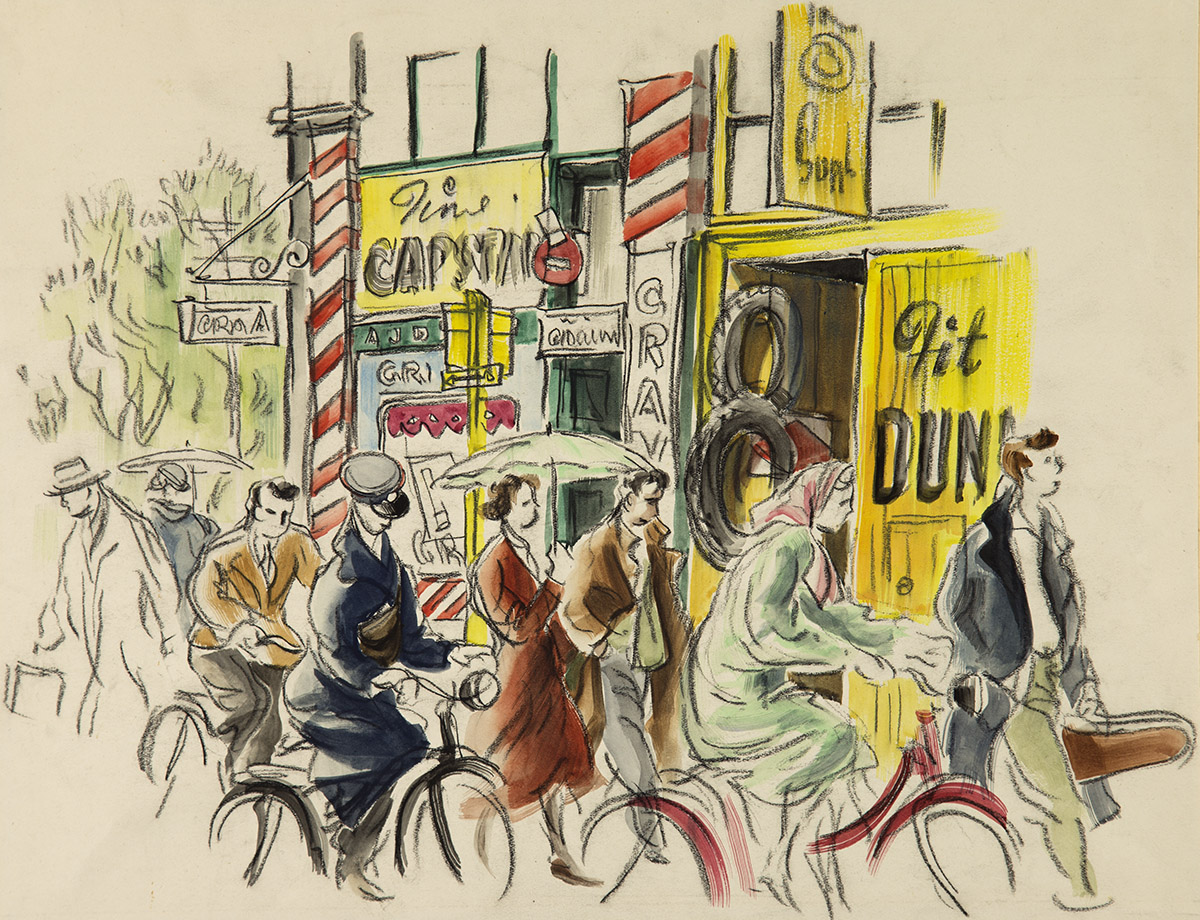 People were the focus of Ralph Miller’s art. In every sketch, drawing or watercolour it is the activities of the people within them that grab our attention: figures strolling down George Street, picnickers in Queen’s Garden, a construction team working in the Octagon. These are not always people known to the artist, in fact, Ralph specialised in drawings of strangers. As a prolific drawer, a sketchbook and pencil were vital accessories on lunch-breaks and shopping trips, as Ralph took every opportunity to make sketches of public life. Like scenes from the advertorial pages of a weekly magazine, Miller’s drawings capture a carefree existence, a coca-cola-like wholesomeness that is appealing in its evocation of the ideal.

Working in the family sign-writing business, O.G. Miller & Sons (now Miller Studios Limited), gave Ralph the opportunity to develop his interest in design, while he continued working on his own art during his evenings and weekends. Pioneering the art of silk screen photo reproductions in Dunedin, Ralph began producing work for business clients that showed a considerable understanding and eye for design.

In an advertisement created by Ralph for O.G. Miller & Sons, the tension between the rigid design layouts of his day-job as commercial artist, and his own more expressive artistic style is played out. On the right, the design element is striking: hard-edged geometric forms coupled with the soft, swirling ‘Miller’ trademark (also designed by Ralph), give the impression of an art deco poster. This contrasted by the woman represented in Miller’s own characteristic style, composed of a brief series of pen-strokes, she is cartoon-like, accentuated by dashes of yellow.

Time spent stationed in the Pacific as a member of the New Zealand Second Expeditionary Force army band during World War II, was put to good use developing and refining his drawings of human figures. On his return to Dunedin in 1944, Miller took up life drawing lessons at the King Edward Technical College with tutor and artist Fred Shewell. These lessons marked a new level of proficiency in Miller’s work, as his characteristic cartoon-like figures are now rendered with an obvious understanding of human form. Recognition of the development in his drawing came in 1944 when Miller was accepted as an artist member of the Otago Art Society, where he was a regular feature in their annual exhibitions until his sudden death in 1956.

Particularly in the more developed and confident style of Miller’s later works, a definite illustrative quality emerges, which bears a striking likeness to English war artist and book illustrator Edward Ardizzone (1900 – 1979). Like Ardizzone, Miller was initially trained in painting with oils, but soon found that watercolour was the more suitable medium for his fluid style, a decision much-helped by his expert tuition by well-known Dunedin watercolour artist Kathleen Salmond (1895-1946).

Design was an all encompassing passion for Miller; it comes as little surprise to learn that he considered himself more a draughtsman than an artist. Miller’s adherence to the principles of design is evident throughout his drawings. As a commercial designer, Miller’s art always followed the principle of good design – to communicate to his viewers. Miller wanted to communicate an overall sense of the scenes he observed: gossiping women pushing prams down the street, children eating ice cream at the St Clair Esplanade, groups of friends meeting outside a movie theatre, lunch-hours in the sun at Queens’ Garden. The sign of a good designer is that we can still immediately understand what he was trying to say.