It is often thought that stained glass windows last forever, but in fact, over time they need some re-leading and restoration, as well as protection.

During the months spent photographing stained glass church windows the author noticed that many needed attention. Some had never been dusted for years, a significant number were slumping or bulging and many did not have correct outside protection. New Zealand can be exposed to stormy weather and salt-laden winds from the Southern Ocean and loose saddlebar wire connections can allow violent wind gusts to weaken windows. Rapid daily temperature fluctuations cause lead to expand and contract, but it never quite contracts to its original size. This eventually produces metal fatigue in the lead and soldered joints, causing windows to crack and buckle.

The extent of any damage depends on the quality of the lead, quality of construction, style of design, spacing of supporting saddle-bars, orientation of the window to sunlight and the type of protection added to the window on the outside. North-facing windows under intense sunlight suffer more buckling, while south-facing windows suffer more from moisture, which is destructive to the painted surfaces. Some windows have been puttied with Portland cement (not oil based), which is strong, but cracks more easily. A few windows have had their vibrancy destroyed by the addition of a new building set so close that no natural light ever hits the window – and fluorescent tubes with static light never do justice to a stained glass window.

Stained glass windows need to be maintained. Layers of dust, lime dust from stonework and carbon from candles all begin to obscure the light and eventually attack the glass. Incorrect cleaning can harm the glass and only a soft vacuum cleaner brush should be used, no chemicals or wet cleaning. Bulging windows, moisture on windowsills, cracks in lead, soldered joints, glass, and surrounding stonework are all signs of potential problems. During firing and annealing, a protective skin develops over the glass and paintwork, but if this skin is damaged by stones, cracking or birds, moisture can begin to attack the painting and even dissolve constituents of the glass.

Incorrect outside protection can have the most damaging effect of all. Iron mesh protects against stones, but has a detrimental effect on the aesthetic appearance. Protective cladding should never be sealed to the building. This creates a glass-house effect producing intense temperatures, which softens the lead, causing extreme bulging and slumping. A protective cover against vandalism or weather, usually toughened glass or polycarbonate, must be mounted at least 20 mm from the window, using stainless steel mounts with gaps on all sides to allow ventilation and prevent build up of heat or moisture. Any protective glazing that is sealed should be removed immediately to allow airflow, unless the windows are isothermally glazed.

Isothermal glazing, introduced in Europe in the 1960s, is the ultimate protection for a stained glass window and can take many forms. Basically, the window wall opening is sealed with plain glass and then the stained glass window (which has been lifted out) is mounted slightly inside the outer glass, with gaps at the top, bottom and sides, to allow warm air from inside the church to rise up a like a flue and circulate across both sides of the window. Isothermal (equal temperature) means the stained glass window is at the same temperature as the air in the building and this stops the damaging effects of condensation, by separating the stained glass window from the outside window and weather. This is similar to the way double-glazing stops moisture and condensation on the inside window. The visual effect of isothermal glazing is no different than if it had been mounted in the window opening in the usual way, but the glass is protected from the ravages of weather, creating museum-like conditions. The large Scott Memorial windows in Christchurch Cathedral were isothermally glazed and, although there were cracks in the surrounding stonework, the windows were completely undamaged and able to be taken out intact following the earthquake. This is a perfect example of the value of isothermal glazing, as the stained glass windows are separated from direct stresses in the wall.

Churches should carry out an inventory of their windows, collect information on the donor, designer, executing studio, location of original cartoons and have windows photographed at high resolution. This information should then be deposited in church archives and a local historical library. The author found a few churches had been converted to houses, where the windows had vanished and church archives had no record of where they had gone. If problems are discovered in any windows, then professional advice should be sought from glass artists who are experienced and qualified in restoration work. The ‘Conservators and Cultural Material’ organisation formed in 1983 lists highly qualified conservators in New Zealand. www.nzccm.org.nz

Sometimes a buckled window may not need to be fully re-leaded. It may be fixed by removing it, placing it on a table, allowing it to flatten and then re-puttying. An expert conservator can advise what is essential, with minimum disruption to the original window and help develop a conservation plan. Graham Stewart who has been heavily involved in the restoration of Christchurch windows for years said, ‘Proper restoration work is meticulous – you have to switch off from being a ‘creative’ glass artist and become a pure conservationist, keeping your personal creativity out of it and being faithful to the original window.’

Stained glass windows in Europe are continually being taken apart and restored every hundred years or so. Stained glass windows were introduced to New Zealand from the late 19th century and large numbers of these are now due for restoration and conservation. It is ironic that stained glass windows donated by wealthy benefactors are now often a severe financial burden on the few parishioners left to maintain a church. The few churches that are thriving tend to be those that have embraced community work on a large scale. But one minister said, ‘How can I justify fundraising tens of thousands of dollars for restoring glass windows, when the parish needs funds to support community work. Is that what God would want me to spend it on?’

Many people still enjoy being married in old churches with their special ambience, created by light filtering through stained glass windows. Local communities may need to consider fund-raising to preserve the cultural heritage held in old churches.

New Zealand’s stained glass should be enjoyed, recorded and have its preservation planned for future generations, as it is an art form that is unlikely to be made in any quantity in the foreseeable future. 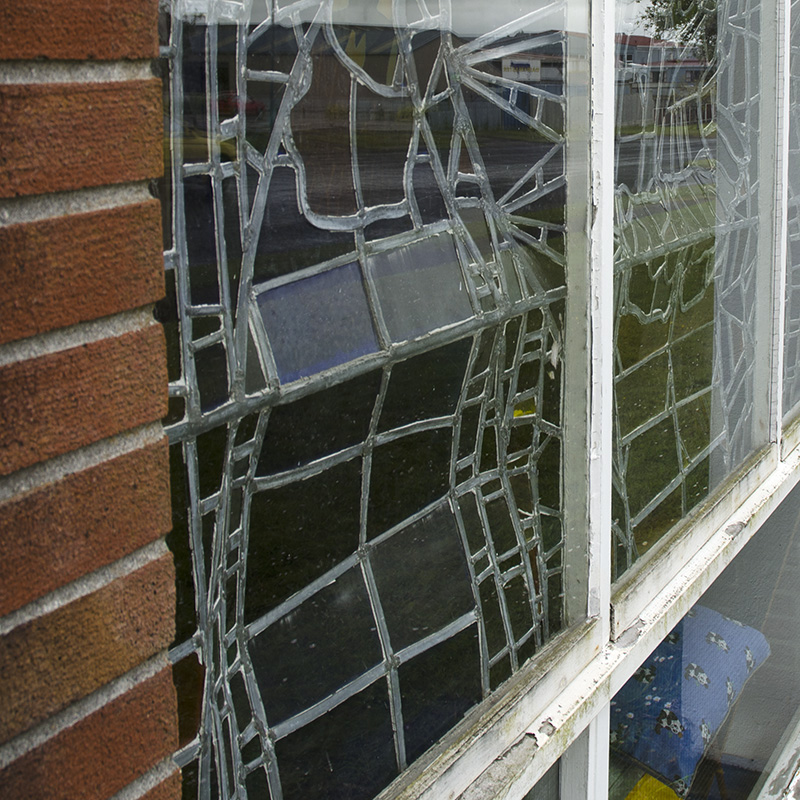 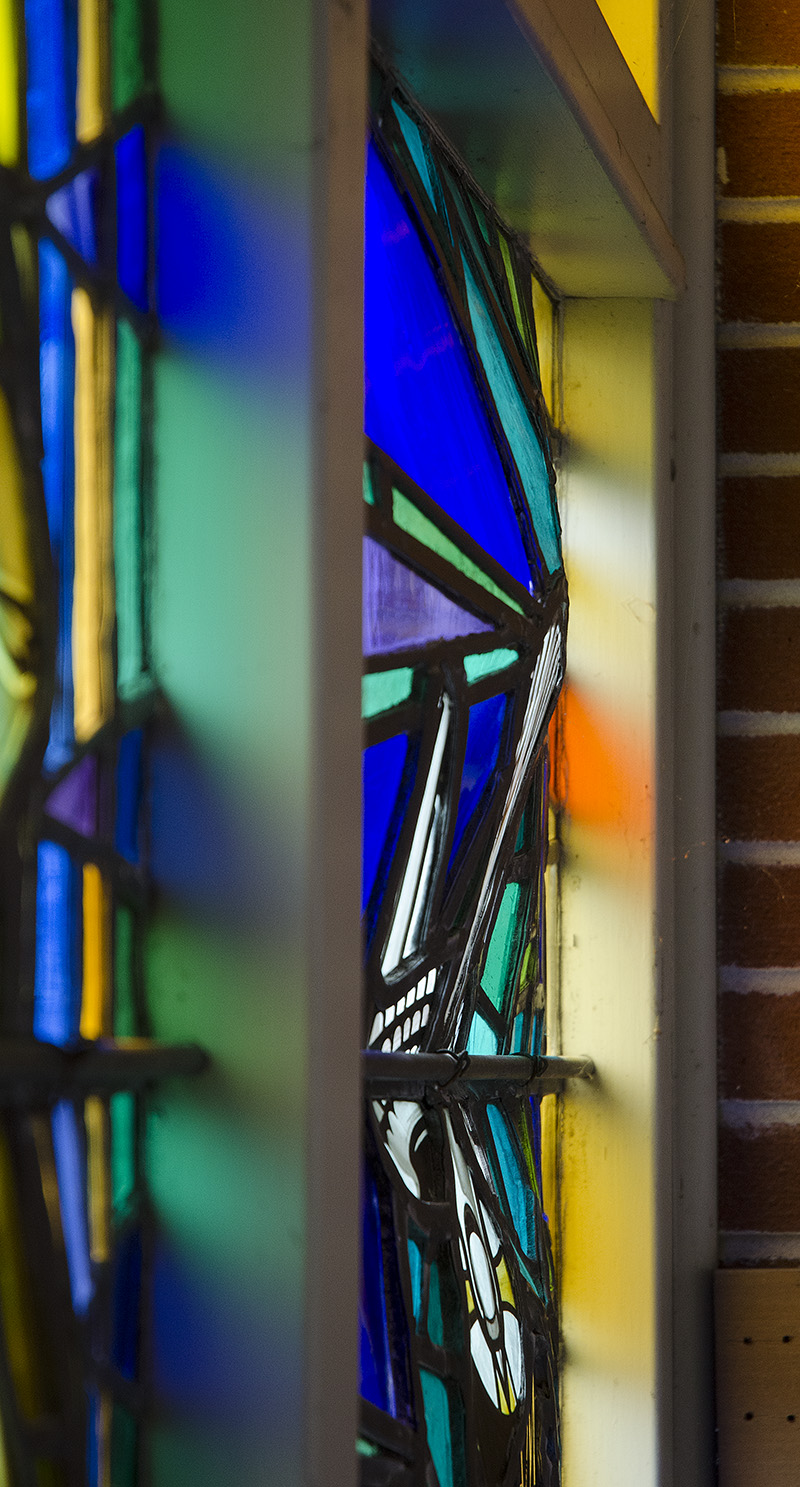 If the protective outside glass is totally sealed it causes excessive heat buildup, softening of the lead and the window soon buckles – as shown below. 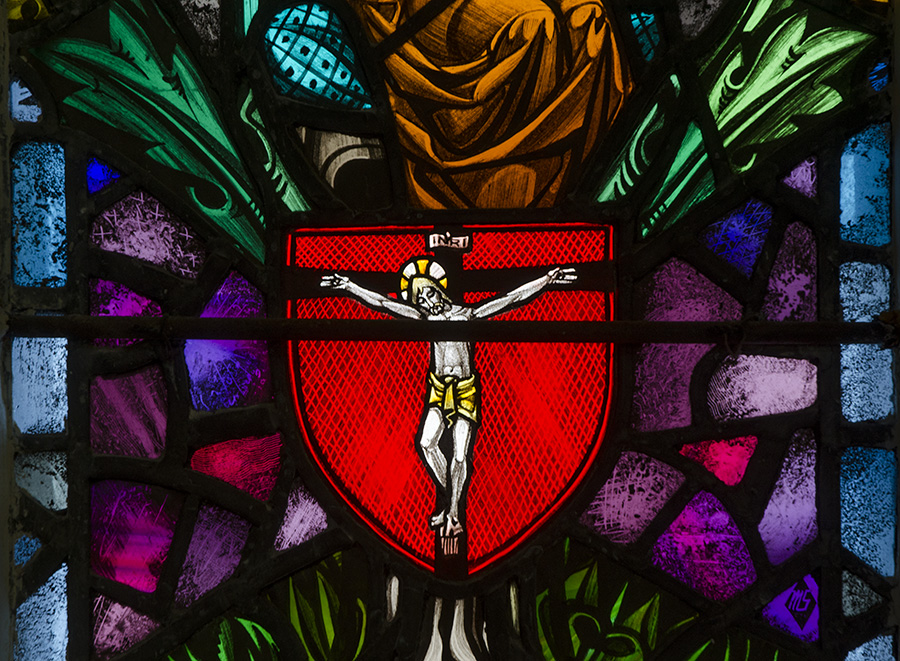 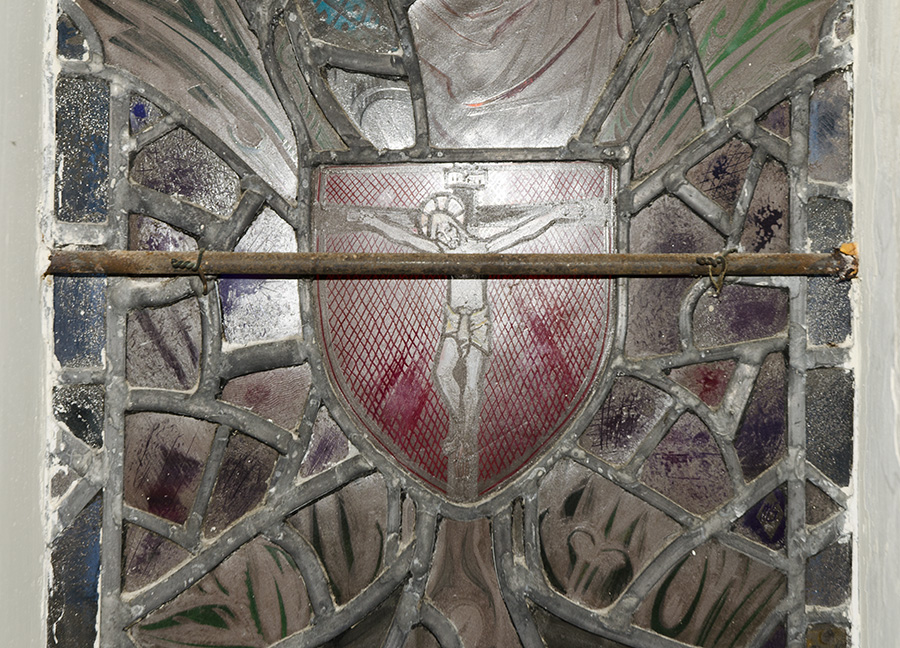 Windows are tied to saddlebars which anchored in the masonery. If these ties become loose the window can start to move and weaken.

Fifty years of Taranaki rain has rusted the soldered joints, reducing the stability of this church window. 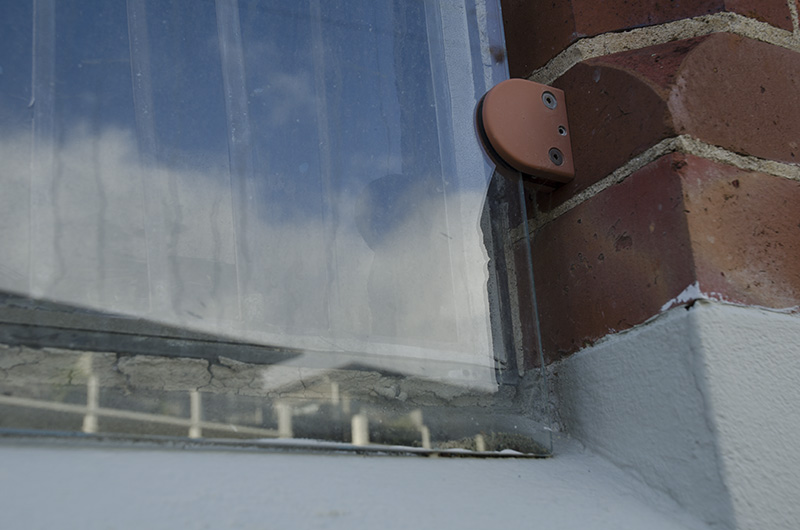 Correct protection has toughened glass or polycarbonate sheets mounted with stainless steel brackets, leaving a gap of 20mm for airflow.